Updates on our COVID-19 Research

Gerd Maul, an esteemed Wistar scientist from 1973 until his passing in 2010, left a prolific compilation of research and art.

The collection incorporates his curiosity and love of travel and culture along with his extraordinary visual eye, reflecting his life as a young man from Germany arriving in the U.S. to teach and conduct research. In June 2017, Gerd's Traces of Information three-story silk banner was reinstalled in Wistar’s Tobin Family Atrium. The banner is a collage of bits of scientific information and of his life and influences. A reception to welcome it back to Wistar brought his wife Ursula Maul, daughter Monika and son Julius back in touch with close friends at the Institute.

Gerd pursued science the same way he pursued art: from visual musings, he extracted meaning that guided his unbound creativity. Gerd was a noted electron microscope expert and while at Wistar, he discovered nuclear dots, structures within the nucleus of mammalian cells that become abundant in response to stress.

“He worked as much hypothesizing science as he did creating art,” says his wife Ursula Maul from her home in Wynnewood. “He used the same thought processes in both arenas and explored how to create art, how to enhance, how to show, how to present.” Throughout the airy home lush with plants, natural light and windows that invite the outside in, Gerd’s art mingles with pieces the couple purchased together. It is a home of endless discovery in travel and art, a free-spirited space deeply connected to nature.

Gerd was a product of his times, born post-World War II in a German town destroyed by the war. Essentially, he was a refugee and learned to live and create from nothing. Traveling far and wide, he was a self-taught photographer experimenting with multiple cameras. The mid-1960s found him on a teaching fellowship at the University of Texas in Austin. There he met his wife Ursula—also from Germany and working at the University.

“Gerd was a boy scout in Germany and through the scouts visited England, met the Queen, and toured throughout Europe, Russia, Africa and the Sahara,” she recalled. “He hitchhiked across countries, living as the locals, sharing their food, and learning about their culture. That internationalism expanded when he was in Texas in his early 20s and got to know many international students. It was quite a crazy life and made a lasting impression on him.”

Travel opened his eyes and his mind to the visual stories unfolding around him.

“Out of masses of things, he could see details and structures which he extracted, worked with and applied,” said Ursula. “For any process, he let nature and the environment stimulate him.”

After Gerd’s graduation from the University of Texas, he and Ursula traveled throughout Central American, down through Nicaragua and then onto Houston where he worked at the University of Texas M.D. Anderson Cancer Center. A year later, he accepted a position at Temple University as assistant professor in the Department of Pathology. Shortly thereafter, Gerd met Temple physician Dr. Irena Grasberg Koprowska, wife of Wistar director Hilary Koprowski, and was recruited to The Wistar Institute.

Gerd’s devotion to technique and analysis crossed genres and spurred his groundbreaking discovery and research on nuclear dots, called nuclear domain 10 (ND10). This structure within the cell nucleus is still mysterious, its function only partly understood. To this day, the most well-regarded explanation of the role of nuclear dots remains Gerd’s proposition that ND10s are protein deposits for enzymes that enable cells to cope with stress and invading pathogens.

For Gerd, science and art happened by means of the same process. He traveled to attend scientific conferences across the world, which in turn fed his artistic opportunities. He worked in all artistic styles and media—photography, painting, poetry, and sculpture in metal, plaster and wood. His contemplations were a roadmap for where his art could take him. He explored sand and wood through its undulating movement and burnt, twisted, knotted bits and pieces and fashioned marble and metals to evoke alarm. Nothing escaped his gaze and imagination.

A tenet of Gerd’s philosophy on the duality of art and science is summed up in one of his quotes: “In science we extract meaning from an object and in art we imbue meaning into an object.”

Gerd’s artist summation below reflects his scientific and artistic individuality and inner culture. It is crucial to understanding his spirit and approach to life. These are his words.

In the two endeavors of my life—art and science—intuitively recognizing some idea of concept begets the excitement that leads to and sustains the laborious execution of bringing an idea out of my imagination into some form of matter. It ends with the excitement and relief generated by the successful completion of such a piece. Occasionally, I find myself astounded that I actually created this form and how it changes my perception of its content or how real content reveals itself over time. In science, my original observations take on their own life and are often refined and improved by others, whereas in visual arts, there is the freedom from having to prove everything with the caveat that what is created is only a starting point in the minds of those who observe and care to look, redefining what it is by themselves.

Working with the same mental process in arts and science but quite different materials and tools my work will affect and effect different sensibilities. Any idea reduced to matter encases my hope for positive and productive engagement by others.

“Gerd had two lives,” said Ursula. “They overlapped in his mind, but expressed themselves in his work and creative life. In his scientific work, he was extremely analytical and that goes very closely together with creating art. He’d ask, ‘How do I explore the idea, what process do I take and how do I express it?’”

Gerd Maul got where he was going through the science of discovery and the artistic freedom of seeing visual trajectories in everything. These brought him directly to the endless possibilities of life. Traces of Information is 10 feet wide and 30 feet long and hangs from the third floor of the Tobin Family Atrium. It represents Wistar’s scientific endeavors and includes a DNA sequence “barcode” holding together a collage of images representing life. Gerd’s science and art were ahead of the times in many ways, the results of which we are still enjoying.

View a gallery of Gerd's art below. 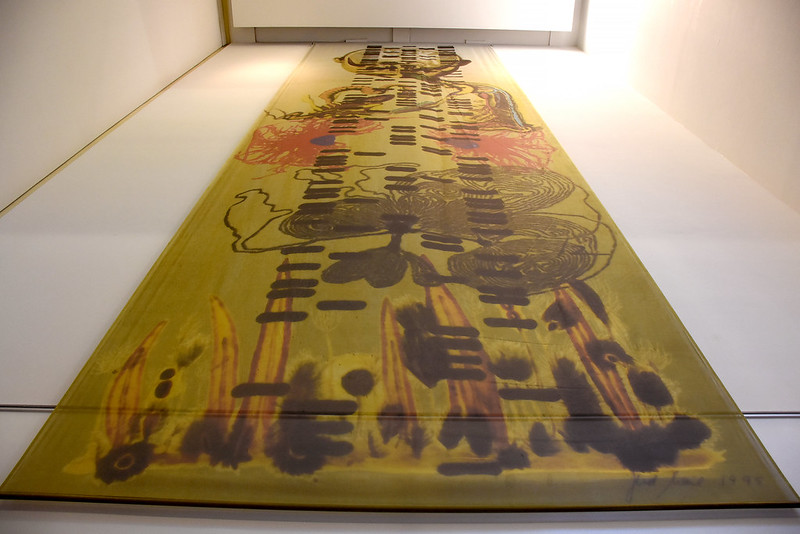